I like goats. I like dogs. I’ll admire a horse. I’m pretty fond of our donkey and our hens. I like children, when they’ve grown up a bit and can be useful around the place. Cats are this far down the list. I don’t dislike them. We need them on the farm to keep the rodents under control, so there are two in the red barn, and Caramel and Oscar here at the dairy. Oscar arrived four years ago from Berkeley, and took to farm life with gusto. He’s the black cat that’s always waiting by the screen door of the cheese shop, waiting to nip in quickly to patrol the premises for mice. He’s a superb hunter. He has a big personality. We’ve grown to appreciate him very much. My husband dislikes cats, but not Oscar. 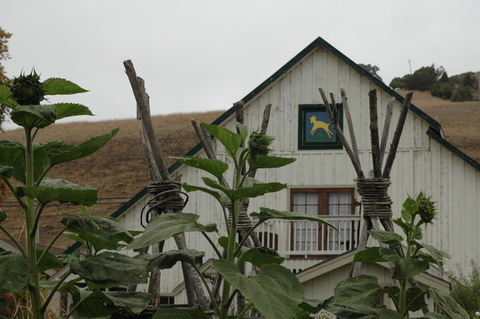 You can see the hayloft balcony through the sunflower stalks here. There is a lovely view across the farm, and Oscar likes to sit there too. He’s been napping on the railing.

Oscar on my bed after his accident

Last week we found Oscar in the garden trailing a leg. He was obviously in serious pain but trying his best to stalk rats nonetheless. I took him to the Pescadero veterinarian, Linda Amezcua. Oscar had shattered his leg into fragments. We think he fell off the balcony railing while sleeping. Apparently cats quite frequently break their bones when they fall accidentally. Well, now I had a decision to make. A major operation would involve titanium pins, not just bonesetting. I don’t have cat insurance. The cost of Oscar’s operation would pay quite a few bills elsewhere.

If it had been any other cat, it wouldn’t have been arriving for its operation yesterday. We are so lucky to have Dr. Amezcua here in town. She arranged for a specialist to operate on Oscar’s leg in her surgery. It took an hour and a half. 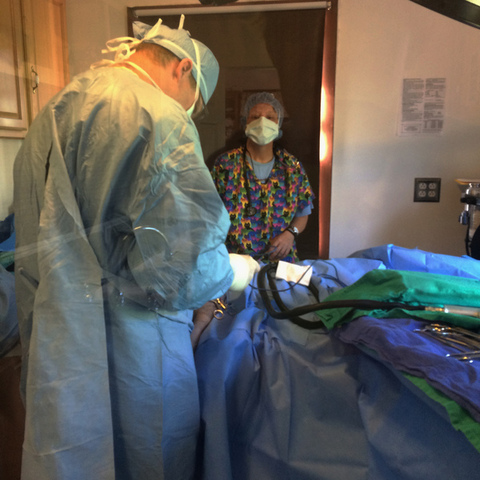 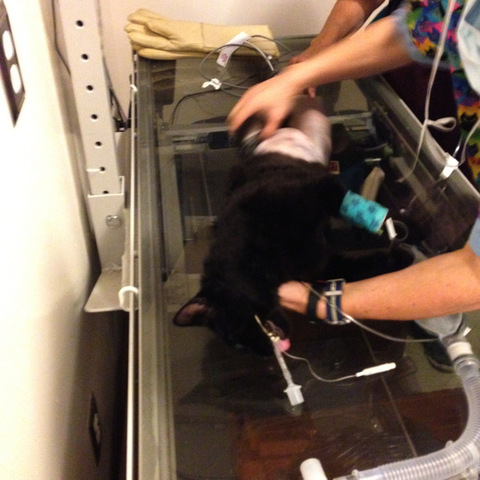 Oscar will have to be confined to a crate for 8 weeks of recovery while his leg sets, so that he doesn’t attempt any hunting. After that, he is a super-cat. And a fortunate one. One life down.